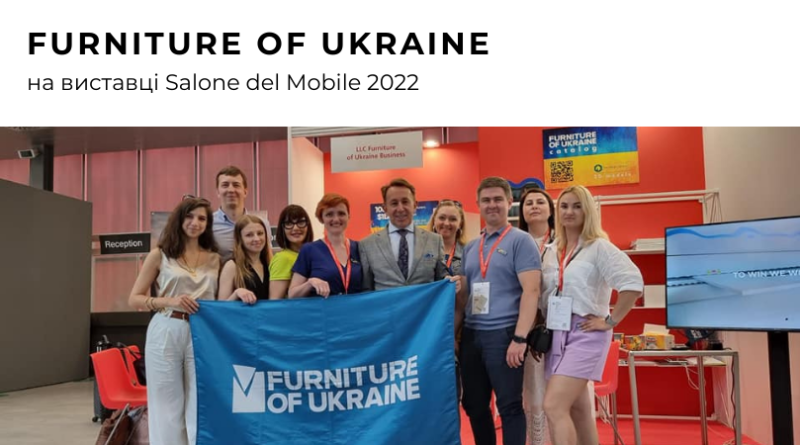 For the first time, the national brand Furniture of Ukraine was presented at Salone del Mobile during the jubilee 60th exhibition in Milan, which took place from June 7 to 12, 2022.

The organizers of the Salone del Mobile provided an equipped stand free of charge as support to Ukraine during the fight against the military aggression of the Russian Federation.

The information stand under the flags of Ukraine and the Ukrainian Association of Furniture Manufacturers became a platform for meeting and conducting negotiations between 11 Ukrainian factories and the Furniture of Ukraine Business Expo team with ISaloni visitors.

During the 6 days of the exhibition, the participants of the national stand had the opportunity to tell the guests of the exhibition what and how much furniture is made in Ukraine, in which regions the furniture makers suffered as a result of the military aggression of the Russian Federation and how entrepreneurs continue the struggle by uniting, accepting the help of the Ukrainian Government, colleagues and international donors.

The Furniture of Ukraine information stand was visited by more than 300 business representatives, about a third of whom were representatives from Italy, and the rest from such countries as Ukraine, India, USA, Germany, China, Great Britain, Estonia, Canada, Belgium and others. According to the activity profile, the vast majority of the booth guests were representatives of the furniture retail and purchasing departments of the hotel and restaurant business. Ukrainian furniture makers were also visited by interior designers and architects.

Participation in the world-scale event was made possible thanks to the active support of the Embassy of Ukraine in Italy, the Council of Exporters and Investors under the Ministry of Foreign Affairs of Ukraine, the Made in Ukraine for Italy Association and the Rivne Regional State Administration, each of which individually and together contributes to the development of the Ukrainian furniture industry.

Salone del Mobile exhibition. Milano was founded in 1961 as a tool to promote the export of Italian furniture and design.