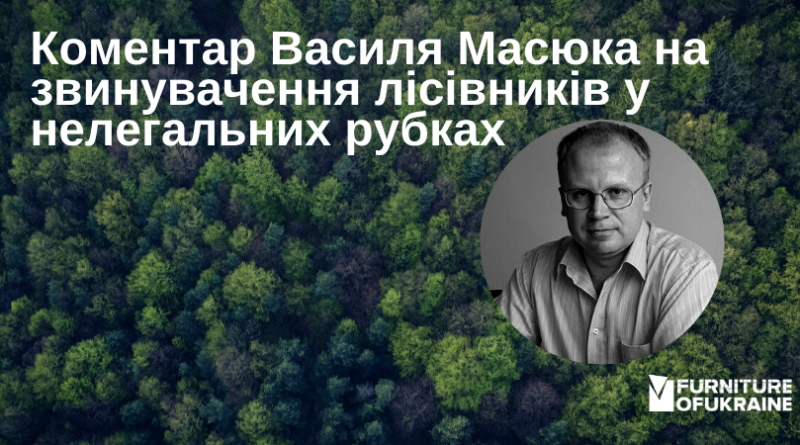 The British newspaper “The Guardian” wrote, referring to the investigation of the environmental organization “Earthsight”, that in Ukraine the practice of harvesting wood that is harmful to nature. Allegedly, using loopholes in the law, loggers resort to logging under the guise of sanitary felling during the so-called “quiet periods”, when birds and animals are actively breeding, so forestry work is prohibited by law during this period, because noise harms forest fauna. The publication, as well as the Earthsight investigation, proved resonant. The FSC, an international organization concerned with sustainable development and forest management (represented in Ukraine), responded by acknowledging that Ukraine’s forest management laws were indeed imperfect, and stated its intention to take additional measures “to ensure the integrity of the timber supply chain” in Ukraine and other high-risk areas. The Swedish IKEA also reacted, denying the accusation that it uses illegally harvested Ukrainian wood. To find out the position on the Earthsight investigation of domestic foresters accused by Europeans of illegal logging, we asked a reputable expert in the timber industry, the head of the Public Council at the State Forestry Agency of Ukraine, the editor of Derevoobrobnyk newspaper and Furniture Technology magazine Vasyl Masyk.

His belief is unequivocally categorical: the conclusions he draws in the report on his investigation of Earthsight are not true, because the study itself is a pseudo-study, because its methods are unethical. In fact, it is nothing more than a set of lies and manipulations mixed with certain facts, designed to denigrate Ukraine as a potentially powerful furniture manufacturer. The study in question strikes a blow to the domestic furniture and woodworking industry, casting a shadow over the origin of our wood, the vast majority of which is harvested and sold legally.
– Ukrainian legislation on forest use is indeed imperfect, but not in the sense in which Earthsight emphasizes. I will say more, there are such ill-considered provisions in some laws, and even laws in general, which were not better. For example, the law on the so-called “period of silence”, which is referred to by European “researchers”. It prohibits foresters from carrying out any forestry work from April 15 to June 15, when forest animals are actively breeding. I am sadly joking about this law that its purpose is to create comfortable conditions for birds to “have sex”. But when foresters see during this period that there is a threat of forest fire, that an invasion of bark beetles has begun, or that destructive tree diseases have appeared, they cannot inactively observe such disasters that threaten to cause enormous damage. Promptly counteracting the ever-threatening threats to the forest, foresters can be accused of violating the period of forest silence. Paradox, right?
– And how should the law be properly written to get rid of such a paradox?
– You can do without such a law at all. A professional forester should be given the right, based on his understanding of the forest situation, to decide for himself, as responsible for the forest, when and how to carry out forestry work, what environmental measures to take. The forester acts like a doctor. You complained to him about something, and he, understanding the symptoms of the disease, decides how to deal with it more effectively.
– Harvested timber is money, it is a temptation, and where is the confidence that all foresters will do their job in good faith and that under the guise of the need for the same sanitary felling will not cut down the forest illegally? How to control it?
– A professional forester, like a doctor, should be trusted. His knowledge, experience, and ultimately professional and civic responsibility. The purpose of the forester’s work is, first of all, to provide the country with wood. And if he sees that there is a threat of destruction or damage to a part of the forest, he must take immediate measures to prevent or eliminate the threat. Despite the fact that his forced actions will be uncomfortable for forest animals, because the threats to the forest are also threats to their lives. Here you do not have to count on their comfort. Sometimes it is necessary to urgently resort to operative – I will turn again to the medical analogy – measures. Before felling healthy trees until they have been damaged, for example, by the same bark beetle. Or to cut down in order to create protective fire (so-called mineralized) strips, when drought threatens to cause fires. To perform these precautions, the forester has to ask someone else for permission, to agree with someone?

And here once again we see the paradox of the mentioned law on the “quiet period”. Referring to this clumsy law, Europeans (not an exception and “researchers” “Earthsight”) consider the wood forcibly cut down in such period, illegal, illegal. Despite the fact that this law, which prohibits deforestation in the “quiet period” – if strictly adhered to – in fact, makes it impossible to protect forests when there is a real need, and therefore interferes with the normal conduct of forestry and actually gives the “green light” to destruction Ukrainian forests, and thus causing significant damage to the state. If foresters do not carry out sanitary felling in time, they thereby expose forests to serious dangers – the same fires, bacteriological threats.
Foresters and hunters, some of the best nature lovers I have had the opportunity to communicate with. They not only love nature in words, but also care about the biodiversity of forest animals. If there are Red Book animals in the forest areas subordinated to them, the places of accumulation of such animals are marked on their forestry maps as biotopes, which foresters always try to bypass when performing forestry works. And such selectivity, and not a total ban on forestry work, is the only correct ecological approach to the case. In such isolated areas, forestry work is not carried out in the classical way and is performed only taking into account the requirements necessary for the preservation of a rare species of plants or animals.
– So, while the current law “promoting bird sex”, according to European standards, Ukrainian quality industrial timber, forcibly harvested in the spring-summer “quiet period”, can not be exported, because it is considered illegally harvested. As well as products from it if the chain of deliveries of wood is investigated…
– Currently, raw wood (round timber) is not exported from Ukraine at all, so there is an excess of it inside the country. And the export ban only limits our market opportunities.
But the worst thing is that British pseudo-researchers will insult our country, our furniture, woodworking and forestry. Any wood that a furniture or woodworking enterprise has legally purchased from a forestry enterprise is legal. A bona fide purchaser of wood (furniture maker or woodworker) should not check or control what methods, when and by whom this wood is harvested. This is the responsibility of foresters, who work under the close attention of the public, law enforcement and other regulatory authorities. And the presence of an FSC certificate in a forestry enterprise is one of the best proofs that the harvested timber is legal, and the management of this forest area is carried out by the methods of sustainable forestry. That’s why I urge furniture makers, woodworkers, and foresters to stand up against the false “research” of Earthsight and explain to society that it is a manipulation.
There is another questionable law that requires foresters to assess the impact on the environment before resorting to sanitary felling. It is not only questionable, but also, in my opinion, one that breeds corruption because it involves a conflict of interest. Foresters, both without him and before him, in their long-term forest management plans always foresaw the effects of planned felling of the main use on the environment, on the state of water resources. The new law obliges foresters to do what they have done and have always done without it, and to pay for such a reassessment by the environmentalists who are responsible for doing so. It would be right to remove forestry from the scope of this law as one that unreasonably increases the cost of wood for furniture makers and woodworkers.