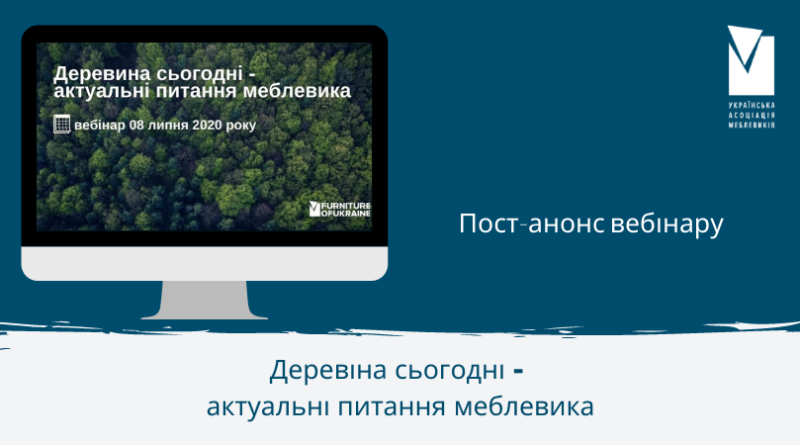 Questions of raw materials for furniture makers in Ukraine remain relevant and require answers. That’s why we organized this webinar. But later they revealed even more meanings than expected.

The speaker of the webinar was Vasyl Masyuk, publisher and editor of the newspaper Derevoobrobnyk and the magazine Meblevi Tehnologii, Chairman of the Public Council at the State Forestry Agency of Ukraine.

Even before the event, we addressed the audience and received questions on the basis of which we prepared this webinar.

Is there a problem with deforestation?

Vasyl spoke about the existence of differences in logging in Ukraine and the world, which depends on the type of logging, felling methods, sanitary norms, and technical support. By all characteristics, logging in Ukraine exists at a very high level.

Is there a shortage of wood in Ukraine?

As for the feeling of shortage of wood by furniture manufacturers, according to the expert, for most species in Ukraine, there is a surplus of wood, only the demand for oak exceeds supply.

Ways of buying and selling wood.

Vasyl singled out two ways of buying and selling timber, including cooperation under direct contracts and participation in auctions. The expert favored the sale of timber under direct contracts, which can provide the projected value of timber in contrast to auctions, which increase the cost, lead woodworking companies to investment risks. Timber sales are associations that buy and sell timber to their members at a projected long-term value for the next five years.

Vasyl also stressed that there are no problems with the purchase of legal raw materials in Ukraine and all timber purchased from forestries is legal. The expert also stressed the importance of refuting the slanders of British environmentalists from the organization “Earthsight” , published in the magazine “The Guardian”, where Ukrainian logging is called illegal and harmful to nature. In Europe, there is an organization that studies the legality of the origin of wood – EUTR, according to a study of this organization in 2018, Ukraine was transferred to the “gray” list, ie to the list of countries to be cared for and this led to serious export losses. EUTR is currently conducting research in Ukraine, the results of which are to be announced this winter. The EUTR’s decision on the illegal origin of timber in Ukraine will lead to a ban on exports to Europe. Vasyl called on furniture makers to appeal to the authorities to have the Ministry of Foreign Affairs sue on behalf of the state of Ukraine or demand a rebuttal because we are dealing with an attack on the furniture and woodworking industry of Ukraine.

Vasyl called for treating the forest industry as the raw material base of the furniture industry and using Europe’s experience in financing, reducing tax pressure, thereby increasing the competitiveness of furniture products.

The expert also predicted a decline in timber prices, which occurs in the European market trend, but in our case, in the absence of funds and the tax burden on forestries, this trend may affect the quality of wood in the long run.

Ecological PR or forest is life.

Vasyl called for the promotion of Ukrainian natural wood furniture in the context of preserving the ecology of the planet. For example, the UN Climate Conference in Katowice recommended the use of natural wood products that keep carbon in a bound state and promote climate balance.

Let’s move on together!

The logical conclusion of the conversation was the agreement on further cooperation between UAFM and the State Forestry Agency of Ukraine in the joint development of both industries, as interconnected and designed to improve the overall economic, environmental and social orientation of our country.