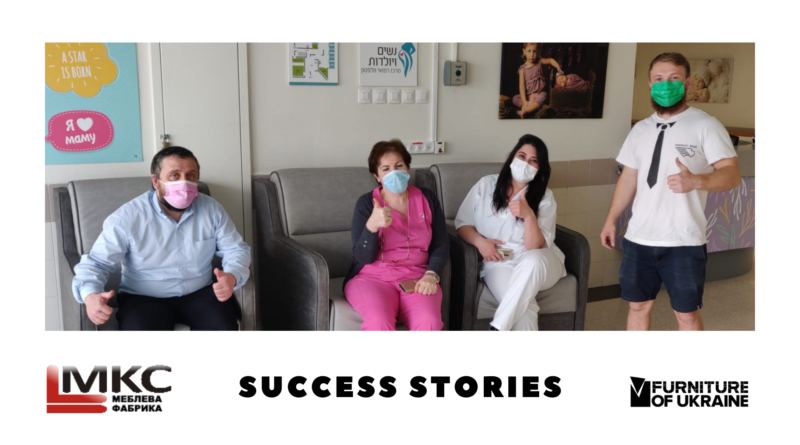 This is exactly what it turned out to be for the upholstered furniture MKS furniture manufacturer from Cherkasy.

Dmytro Patis, the head of the Export Platform of the Ukrainian Association of Furniture Manufacturers, spoke about this export project, bringing more than one furniture company to export markets, including the same Israeli one. Here and in this case, he not only initiated this project but also accompanied it on a long and difficult export way.

– Tell us more about this export history. How did it turn out to be difficult?

– As you know, this is not the first export project that Ukrainian furniture companies are implementing with the assistance of UAFM in the Israeli market. Although the market is very promising for us but highly competitive. Because we have thoroughly studied it, we understand that it is difficult to compete with serial furniture made in China and Turkey. Therefore, looking for new opportunities to promote Ukrainian furniture, we decided to focus on specialized, narrow. There to look for a niche for yourself. In particular, the project in question concerns hospital furniture. More specifically: upholstered furniture for waiting and resting places in hospitals.

The customer announced a tender for Ukrainian furniture manufacturers. Several companies responded to it, but all of them, except for ISS Furniture, quickly “went the distance”, realizing that the order would be unprofitable, but quite troublesome. And it really turned out that way. One of the models offered by Cherkasy residents as a base was meticulously demanded by the meticulous customer several times, adapting the modified versions to his needs. This process of alterations and refinements lasted for a whole year.

– You can only envy the patience of Cherkasy…

– So. And we in the Association are grateful to them for that. And for the fact that they passed the long test of the Israeli customer’s presence with honour, and even more for the fact that they volunteered for it, despite the insignificant financial benefits from this tedious project, putting their image of Ukrainian furniture above them. In the end, they pleased the customer by sending more than one test model, which was tested for strength and comfort by both patients and staff. And the first batch of upholstered furniture has already been sold to one of the most famous Israeli hospitals.

– And what did not suit the Israelis so much in the proposed basic model?

– They wanted a lot of changes. This is in addition to ensuring that such furniture complies with generally Israeli furniture standards and requirements for furniture for use in medical facilities. For example, the leather upholstery had to be replaced with one that could be washed repeatedly. For some reason, the customer demanded that the armrests be higher and narrower. Even the invisible frame had to be painted, because, it turns out, there should be no “open” wood anywhere. The only thing is that the design of the products bothered the customer much less than their modified functionality.

I would like to emphasize once again that although this export project turned out to be difficult, troublesome and at first not very profitable for the ISS Furniture company, it became an important image step for the domestic furniture industry, and for this Cherkasy residents have great respect.

I will also say that the situation in the Israeli market is now changing for the better for Ukrainian exporters. The expansion of Chinese furniture is weakening due to the fact that their delivery and other logistics costs have tripled. We will try to make the most of this situation.