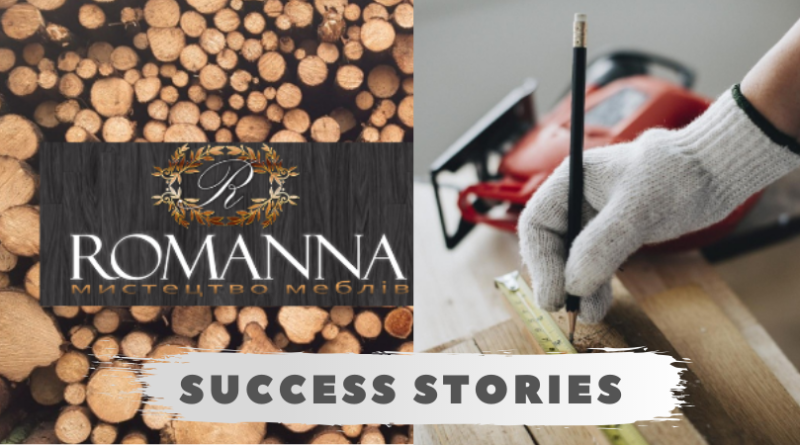 “Sketches and sketches of client desires” turn into solid furniture

Want a riddle? How can one be an exporter of furniture selling them Ukrainian? Uzhgorod furniture studio Romanna Mebli, which such an exporter is, can be a mystery. Of course, we demanded guesses from its founder Юрій Гах. A further export story told by him would be such a mystery.
We will not intrigue, but let’s inform right away: in this way it is possible to export furniture by selling it to fellow countrymen, went abroad to work (Czech Republic, Slovakia, Hungary) and settled there so much that they acquired real estate. That’s just for furnishing their foreign premises Transcarpathians and buy furniture (however, more correctly – order the manufacture of furniture studio Gahiv).
It’s easy for them to do it. In the city and the Romanna region, a well-known and respected furniture maker. Migrant compatriots (and often emigrants), while at home, do it themselves or entrust relatives.
“Of course, the furniture ordered by compatriots is not an economy class,” the source said, “because they are ordered for their own premises, and besides, they want their houses to meet European standards.” And it is of this level, respectively, and price, we produce furniture. Of course, not in series, but on order. Not only for export, but also for purely domestic consumption.
Export for foreign Ukrainian accounts for only a tenth of sales, however, the studio has as many as four design departments. And not because, first of all, that foreign orders are complex for design and manufacturing, but because the Romanna studio is a universal furniture maker. In its workshop with a full production cycle, it equally creatively and creatively produces both bedrooms and kitchens, both living room furniture and dressing rooms. Although he listens to customer requests and even seriously takes into account “sketches and sketches of their desires,” there is still enough work for full-time designers.
“Maybe this is paradoxical,” says Yuri, “but domestic orders are usually more complicated, customer requirements are higher, and whims are more sophisticated than those who have housing abroad.
We are proud of the “Romanna” branding ideas, and recent information from the Czech Republic testifies to the fact that they really are. A client to whom the local team mounted our furniture said that the guys didn’t swear, as is often the case during installation, but rather paid compliments to the manufacturer: that the furniture is better in quality than the Polish ones, which are plentiful in the Czech Republic and throughout Europe, and are mounted quickly and without problems. Here is the answer to you, why fellow countrymen prefer Polish furniture, but ours, although they are not cheap (but still not expensive, I want to note).
The company provides services for the delivery and installation of furniture ordered from her. Including abroad. True, mainly when it comes to the implementation of complex furniture and interior projects, which are usually ordered for furnishing new buildings. In such cases, not only the team of installers is sent, – it happens, and for two weeks – abroad at the final stage, and designers – at the initial stage to carry out the necessary measurements, to precisely link the project to the features of the object.
Of course, every company strives to grow. No exception and “Romance.” And she does not want to be content with a tenth of the export. The acquired furniture experience, partner authority and the acquired image that Yuri spoke of are reliable help for this, but physical capabilities are on the way. Without building up production capacities, personnel expansion (15 workers are now executing the order), there will be no movement forward, Uzhgorod furniture makers recognize. So, it is not difficult to guess what a priority strategic task we have set ourselves.

The section “Success Stories” was founded in the framework of a grant project with the support of the Swiss Cooperation Bureau in Ukraine, the name of the project: “Improving the level of cooperation and trust with joint participation in international and national public procurement” – TENDER TOGETHER.