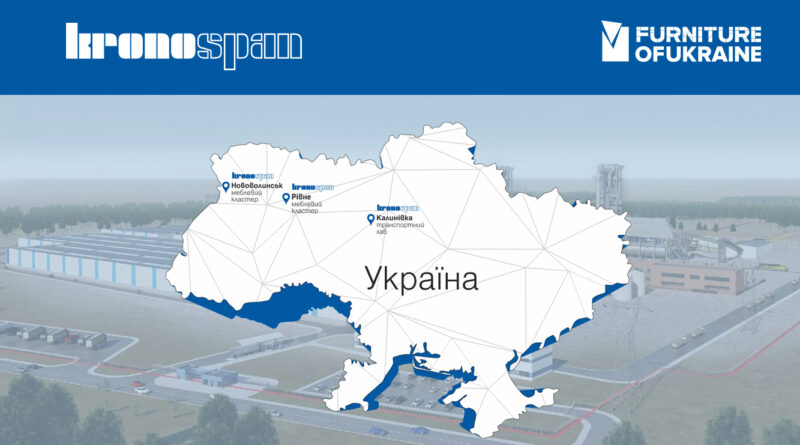 An initiative that addresses the urgent needs of both the furniture industry and local communities.

The Ministry of Community and Territorial Development of the Ukrainian Association of Furniture Manufacturers together with the domestic manufacturer of board materials – Kronospan Ukraine presented a cluster development project in Kyiv, Rivne and Volyn regions.

Ukrainian furniture clusters will not only contribute to the development of the industry but also, being filled with social content will become a significant stimulus for the development of local communities. Furniture clusters, increasing the economic potential of the regions and thus developing the domestic economy as a whole, will create a significant number of new jobs for Ukrainians who will be able to receive decent wages at home. These theses at a meeting with the Minister of Community and Territorial Development Oleksiy Chernyshov and the Head of the Kyiv Regional State Administration Vasyl Volodin were convincingly argued by Natalia Pokinska, General Director of Kronospan Ukraine LLC, Taras Shvyhar, Sales Director, and representatives of the Ukrainian Association of Furniture Manufacturers – Donor Cluster and member of the board of the Association Andriy Kolesnyk.

The development of the domestic furniture industry is slowed down by the lack of industrial zones with affordable tariffs for the maintenance of production facilities near large cities, the lack of large and efficient furniture logistics operators, the culture of joint business and the business model of furniture clusters. Such problems are designed to solve furniture clusters, the development project of which was presented at a meeting at the Ministry of Community and Territorial Development.

During the meeting, the general state of affairs in the furniture industry and prospects for its development were discussed, tasks were outlined, the solution of which will contribute to the effective development of furniture clusters in the country. In particular, we need to develop a national program of cluster development, development of infrastructure of industrial and technological parks, development and implementation of investment projects for the production of new products, which would have export potential, Ukrainian furniture and board materials need quality domestic raw materials at reasonable prices. Representatives of UAFM, which is also concerned with the staffing of the industry, focused the attention of the participants on the educational task – the need to train personnel to implement the revolutionary concept of Industrie 4.0 in the furniture industry, which is already operating in Europe. A number of other urgent needs were also voiced. The ministry promised assistance.

The general plan of actions has been formed and previously approved by the representatives of the regions, stakeholders have been identified who will be helpful in the implementation of the plan.