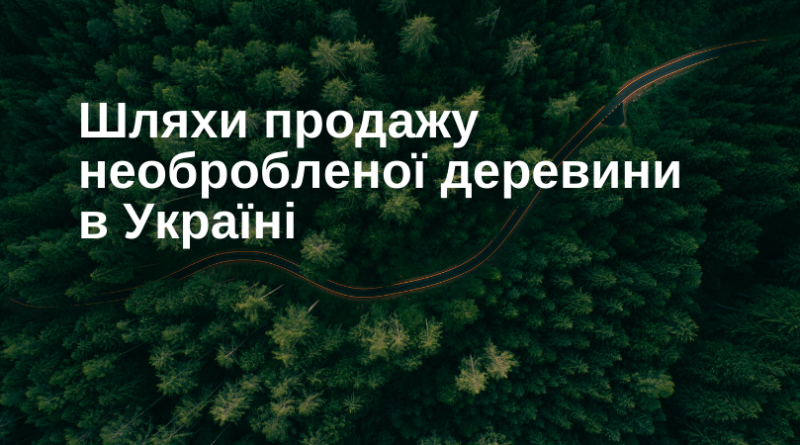 This week the State trading platform “Prozorro. Sales “together with the Ukrainian Association of Furniture Manufacturers held a meeting on the problems of selling raw wood in Ukraine. The meeting was attended by interested organizations and individuals.

This topic, let’s say, has frankly filled everyone’s attention for a long time, but since it is still not resolved in the country to satisfy everyone – those who grow forest, harvest and sell wood, and those who process and use it, – then stakeholders periodically return to this topic and its problems in the hope of accelerating the process of finding the best solution for all. And for UAM this is not the first such attempt, but the current meeting is almost the first such representative.

The purpose of the meeting:

● to form a common vision of the list of problems that hinder the effective functioning of the raw wood market in Ukraine;

● identify a list of actions needed to address these issues;

● reach agreements on a joint action plan (preparation of amendments to legislation, changes to government regulations), necessary for this, identify stakeholders who need to be involved in such work.

Research of the problems of the raw wood market, a vision of the current state of sales, proposals to eliminate the existing shortcomings.

At the beginning of the meeting, a study conducted by the United States Agency for International Development (USAID) on the problems of the raw wood market and the vision of the platform “Prozorro. Sales ”of the current state of sales of untreated wood and proposals of its representatives to eliminate the existing shortcomings in this case.

As noted in the opening remarks by the Chief Operating Officer of Prozorro. Sales» Daryna Marchak (she, together with Oksana Donska, a representative of UAFM, was the moderator of the meeting), from February 1, 2020, the Resolution of the Cabinet of Ministers, which stipulates that the sale of untreated wood by forestries electronic trading system “Prozorro.Sales”. Therefore, this state-owned enterprise is now directly related to the sale of raw wood, knows the problems that exist in the market, and has a vision of how to eliminate them, so it is natural that the platform became the initiator and co-organizer of this meeting.

“Prozorro. Sales”, based on its own experience of participating in sales of raw wood in Ukraine, expressed a number of comments and suggestions and offered assistance to market participants in developing joint proposals to develop an optimal model of market regulation. In particular, she noted that there is almost no consolidated position of the industry on the fact that it does not suit the process of selling wood.

to form a powerful lobbying force in the country, the position of which will be impossible not to listen to the authorities; secondly, it is necessary to jointly intensify legislative initiative in this area. «Prozorro. Sales” has sufficient potential to take a practical and effective part in such developments.

She told Daria Marchak and part of the platform in a pilot project for the organization of electronic trading in wood, which revealed a number of shortcomings of state regulation of the industry. In particular, despite the rule that timber should be sold exclusively through electronic auctions (ie direct contracts should not be concluded), according to statistics, more than half of all sales of unprocessed timber are still sold under direct contracts. The decree stipulated that a quarter of the harvested timber should be sold on the Prozorro site, but did not provide an answer as to how all other volumes of timber should be sold in electronic format. The resolution and the issue of banning the conclusion of direct contracts with forestries have passed. This decision worked at the beginning of the year. The market, inspired by it, was noticeably more active at the beginning, but in April-May, there was a significant decline, almost to zero. Since then, it has become clear that the current resolution on the introduction of electronic trade in timber is not the state document that can bring order to the sale of timber. For example, forestry sellers openly sabotage the provisions of the resolution to reduce the price of lots when they are re-put up for auction, in addition, put up for auction low-quality wood. The low quality of non-uniform lots does not encourage buyers to buy them. A significant problem is not an objective determination by sellers of the cost of wood offered for sale.

When the Prozorro platform has only a partial idea of ​​what is actually happening in the domestic timber market, it cannot objectively assess the market in order to act as objectively as possible.

this resolution did not make the timber market in the country transparent. Prozorro can only make it 25 percent transparent. Proposal: not just a government decree, but to legally regulate the identified and named problems.

Similarly, despite the requirement to re-bid, at a reduced price, for the second auction of lots that were not sold on the first attempt, forestries almost never do so. Mandatory price reductions at the second auction should help solve the common problem of inflated starting value of lots, which is determined by sellers.

Another important issue that needs to be regulated is the lack of unification of lots and filling of lots with a large number of different types of wood, which does not encourage buyers to buy them.

Finally, an important problem is the lack of public access to the whole set of information on the amount of wood, at what price, and to which buyers forestries sell untreated wood. In particular, as noted by Daryna Marchak, information on the results of timber sales based on the results of auctions is fully disclosed in public access in both detailed and aggregated form, only SE “Prozorro.Prodazhi”. Other market participants do not. This significantly limits the possibilities for analyzing the market situation and, consequently, for correcting existing problems.

Thus, as Daryna Marchak noted, state regulation of the market for the sale of unprocessed wood needs further improvement (including at the legislative level) and detailed regulation, in order to block opportunities for market participants to fail to comply with certain regulations.

Although the overall understanding that the market is not working well and needs to be changed at last has been demonstrated by most participants in the discussion, some issues have been fiercely debated.

In addition, Lyubov Polyakova was critical of the results of the USAID study, believing that they should not be taken as the basis for the current discussion on timber sales in Ukraine. She added that the rules on timber trade and the development of a bill on the timber market in Ukraine, which will include these rules, are currently being agreed with all stakeholders. It was noted that at the initiative of the Public Council at the State Forestry Agency a working group was established to agree on the draft law between various stakeholders.

Vasyl Masyuk noted that he considers the pilot to fail in the sale of untreated wood through electronic auctions. In his opinion, e-auctions, and even more so stock trading, is not the best method of selling wood, and advanced countries still prefer direct contracts. Also among his remarks was that the commission at the auction “Prozorro. Sales “is three times higher than that offered by regional exchanges.

Danilo Malandiy, a member of the government’s working group on reforming approaches to forest management, who also joined the discussion, was even more radical towards the initiator of the meeting: “Prozorro” under the guise of national interest takes care of its own, seeking a blanket (ie timber trade). ) drag to his side, with which the representative of the site, of course, did not agree. “We do not demand that all domestic timber be sold through Prozorro. Sales “, we are for competition between bidders, but according to the same rules, because now they are for everyone, so it is unknown who sells and buys wood under direct contracts and in general outside of” Prozorro “.

According to Bohdan Tsupryk, chairman of the Committee for Woodworking and Furniture Industry of the European Business Association, the current size of the commission at auctions means that in monetary terms it will cost bidders up to eight million hryvnias, ie a significant burden on their budgets. In addition, in his opinion, maximizing the selling price does not always benefit the state, because selling wood at a high price can stop the development of the woodworking industry.

In response, Daryna Marchak noted that during the amendments to the regulation, “Prozorro. Sales” proposes to significantly reduce the rate of commission for the sale of untreated wood at electronic auctions, in order to increase the interest of market participants in them. At the same time, she noted that none of the large processing companies currently buy wood through e-auctions “Prozorro. Sales”, so there is no reason to talk about the financial burden on them.

Yuriy Marchuk, chairman of the Ukrainian Foresters ‘Association, was able to reconcile the opponents’ position somewhat. During his speech, he raised a number of other important issues of market functioning. In particular, the transparency of activities is important not only for forestries but also for buyers of raw wood. “Currently, the timber market in Ukraine is experiencing a decline that has not been seen for several decades. This has led to the fact that forestries resort to combined lots, which include both kinds of wood for which there are significant demand and wood for which there is no demand. They need it to sell everything they buy – and thus “survive”. Of course, this interest contradicts the interest of buyers who do not want to buy low-grade wood that got into the lot. Furniture makers are interested in high-value assortments,” said Mr Marchuk.

According to Marchuk, Ukraine will not be able to reach a situation where all the wood will be sold at auctions; direct contracts will remain. According to him, in Europe there is a system of “50 to 50”, ie half of the wood is sold at auctions, and another half – under direct contracts, but all information about them is publicly open. According to him, Ukrainian foresters want to work in a civilized manner and disclose information about their sales, but a third of forests in Ukraine are not under the control of the State Forestry Agency. These are the so-called departmental forests and self-seeding, which also need to be controlled (and a bill is currently being drafted).

Results of the meeting

In general, the discussion revealed the impossibility of developing a consolidated position on improving the organization of sales of raw wood, the current state of which in principle does not suit both parties, which were during the conversation opponents.

In such conditions, the development of a joint action plan between market participants aimed at improving the situation on the domestic timber market is currently quite difficult. However, the parties involved in the discussion agreed on the next few steps to be taken.

First, UAFM and “Prozorro. Sales” expressed readiness to join the working group on the draft law on the wood market, so that their position could be heard during the development of the bill.

Secondly, at the suggestion of UAFM, it was agreed that a working group (in particular, with the participation of “Prozorro. Sales” and “LIAC”) should be established to develop common approaches to the disclosure of data on sales of raw wood.

Third, a separate working group will be set up to work out a possible solution to the problem of opacity and the lack of a clear methodology for determining the cost of raw wood in Ukraine.