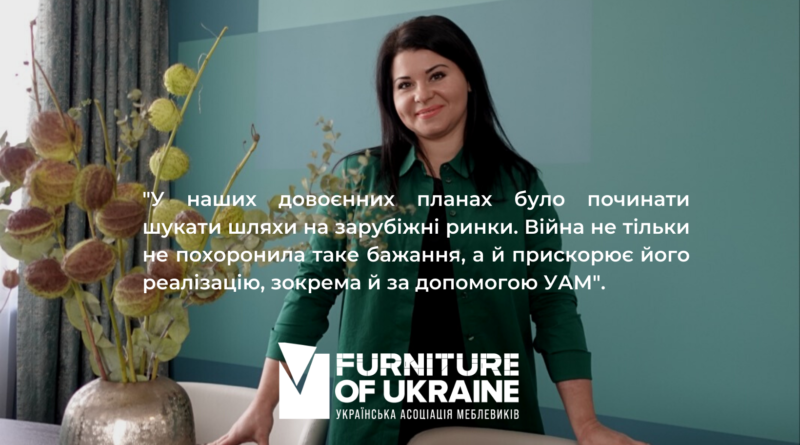 At the end of February, the war sent most of the capital’s industrial enterprises on a forced two-month vacation, and simply put them on vacation. The furniture manufacturing workshops of the “TALANOVA” furniture studio were put into operation only after the threat of the occupation of Kyiv was eliminated. And when, somewhere in the middle of May, Lyudmila Talanova, the founder and head of the company, returned home, who, like thousands of Kyiv mothers with small children, was forced to go abroad in order not to expose them to possible mortal danger.

There was not only a temptation, but also a real opportunity, Lyudmila admits, to change the status of a refugee to the status of a resettled person, that is, to stay there for permanent residence, but she could not. Not only native walls beckoned, but also her creative and industrial brainchild – her own furniture studio, which, as her ideologue and inspiration, she developed for many years, perfected to the ability to create European-level furniture products. In addition, a husband remained in charge of the studio and production (they are actually a family business), and loyal members of the team could not wait to get back to the work they love.

– They began to finish the projects that were put into production before the war. Individual fragmentary orders from regular customers happen, but for large-scale, complex, but creatively interesting projects, which for a known reason stopped coming, we all frankly missed them. But we are also glad for what we have: because the product is intact and efficient, and our furniture salon can just as hospitably invite and receive potential customers, which, unfortunately, some colleagues are deprived of, who were deprived of the opportunity to do their life’s work during the war, and even took her away.

– Many of your colleagues who resumed furniture making after a forced layoff, as well as those who were more fortunate and did not stop making furniture, the war forced them to reconsider the philosophy and mission of their companies. Didn’t you have such a need?

– It also appeared in front of our studio. We understand that when the war ends – and it will end, undoubtedly, with the victory of Ukraine – the need for furniture products will increase many times: it will be necessary to furnish housing raised from the ruins. At the same time, we realize that the need will be mostly not for furniture of the level at which our studio works (in the “medium plus” price segment), but for much more modest, cheaper ones…

– No, not like that. In no case will we give up the European level of furniture, which we have achieved through years of hard work and creative efforts, from the developed image of the “TALANOVA” brand – it was really not easy to give such an asset to be neglected. Now the team – primarily me, designers, and technologists – is working on developing a line of furniture of the “medium minus” class, that is, cheaper in price. We figure out how to reduce the cost of the product without compromising on its stylish appeal and – most importantly – on quality because quality is the basis of the TALANOVA brand. It will be necessary to find suitable materials, components and, of course, technologies that would make production cheaper.

The war, figuratively speaking, did not “disarm” the Ukrainian Association of Furniture Manufacturers, of which your company remains a member, of the rhythm and volume of its unifying it did not deprive the furniture community of its activities. Having become practically also an industry volunteer headquarters during the period of national calamity, the Association guides and targets its members to meet the furniture needs of wartime. It helps them to find orders in conditions of actual stagnation of the furniture market. In your opinion, what else could UAFM help companies like yours at this time?

– And she is already helping. In particular, ours. Because she planned to hold a special Furniture course for the beginning of August Business Academy “Preparation for B2B meetings”, the purpose of which is to quickly teach interested managers of furniture companies, members of UAFM, to effectively present themselves and their brand, as well as to feel confident in B2B negotiations with the aim of selling their product for export.

Our pre-war plans were to start looking for ways to foreign markets. The war not only did not bury such a desire but also accelerated its realization, in particular with the help of UAFM. I responded to the selection of students for this targeted special course announced by the Association and I look forward to the start of online classes.