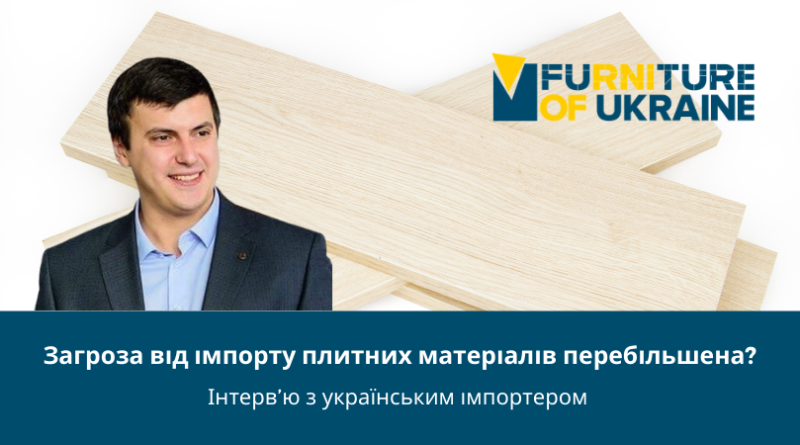 The market of board materials was once again aroused by the dissatisfaction of domestic “tilers”. They have long been dissatisfied with the import policy on it, which, allegedly, due to the unhealthy competition created, is displacing domestic plate products from the market, causing losses to Ukrainian producers. The current outburst of discontent is caused by the government’s recent exclusion from the draft resolution on measures in response to Russian restrictions on imports of Ukrainian goods chipboard, approving a document allowing Russia to supply particleboard to Ukraine, while Ukrainian boards can not enter the Russian market from the 2018 year. Although it is logical to respond to Russia’s aggression in the trade of mirror bans. The threat is that it is noted that Russia is dumping imports. As a result, domestic producers are also forced to lower prices to their detriment in order not to lose market share.

No fewer claims from domestic manufacturers of board materials and the fact that, say, in a dumped way and imports similar Belarusian products. The arguments are as follows: most Belarusian manufacturers of plywood and particleboard are part of the state concern “Belarusian Forest Company”. For it, as a state-owned company, Belarus has created the most favorable conditions, because it is a source of foreign exchange earnings. In addition, the price of wood in Belarus, in contrast to Ukraine, is 40% cheaper. In addition, the enterprises included in the Belarusian Forest Company concern are actively financed by a specially created State Development Bank. In fact, for such companies, the sale price does not matter, they can sell their products at a loss, just to get foreign exchange earnings.

One of the Ukrainian importers, including Belarusian board materials, is Neman TМ, which is part of the Neman group of companies. We asked its director Anton Kurgansky about his vision of the situation on the domestic market of board materials.

In his opinion, the situation – in the sense of deficit – today in the Ukrainian market of board materials in the last six months, though not extremely critical, very threatening. As for MDF in particular, its deficits are really critical. As for particleboard, there is a particular shortage of some decorative groups, which are needed primarily by furniture makers to create exclusive furniture collections. The reason for this was, in particular, the quarantine restrictions in which the economy found itself and which disrupted the logistical supply of materials used in furniture and construction. Including slabs. Therefore, filling the market with imported board materials, Antin Kurgansky is sure, does not harm him in any way and does not distort it in any way. Regarding the dumped trade-in Belarusian stoves, which Ukrainian “tilers” accuse importers of, he answered as follows:

– When setting prices for board materials both Belarusian-made and imported, say, from Turkey, we always focus on the needs and capabilities of our customers, for whom it is important that their products are competitive in foreign markets. It should be understood that any increase in customs pressure on imported board materials will inevitably harm primarily Ukrainian furniture and “doormen”.

The accusation that imports of Belarusian plates are threateningly dumped is clearly exaggerated. If we talk, for example, about the Belarusian MDF, in the last three months the prices for this material have increased by 35 percent. Since August last year, there has been a monthly increase in the price of imported particleboard. So I can authoritatively say that today the board materials of the Belarusian production are not in a more favorable position in the domestic market in comparison with the same materials of the Ukrainian production. In addition, the share of their imports (especially particleboard) is so insignificant, so incomparable with the volumes supplied to the domestic market by Ukrainian “tilers”, that it is ridiculous to talk about unhealthy competition, from which they allegedly suffer losses. As for MDF, the situation is a bit different here: the volume of imports really prevails, because there are objectively not enough domestic plates. And their price is not attractive for furniture makers and “doormen”, especially those who aim to export their products.

I would like to take this opportunity to say that we are currently unable to import slabs from Turkey because the government there has begun to create obstacles to the export of polished slabs.

Cheaper (dumped) imports of board materials, if they really are – as they say, a stick with two ends: on the one hand it is dissatisfied with domestic manufacturers, “tilers”, and on the other – it is unlikely that users will oppose such materials, which it certainly is profitably. You need to look for an acceptable middle ground.

Meanwhile, tilers (according to Serhiy Lishchyna, co-owner of Ukrainian Sawmills and an active opponent of slab imports), not hoping for customer solidarity and government assistance, initiated an anti-dumping investigation in February into imports of chipboard originating in Russia and Belarus. . The Interdepartmental Commission on International Trade took this argument into account and initiated an anti-dumping investigation against the Russian and Belarusian partisans.