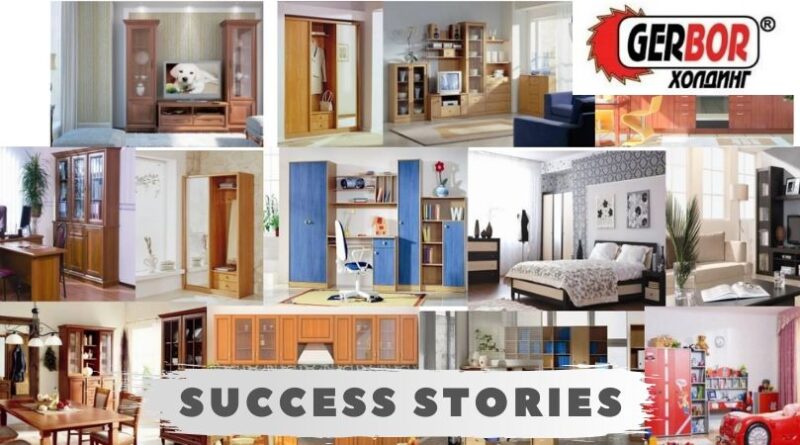 They need a Persian coast and Africa too …
Gerbor Design (Гербор Дизайн), like most Ukrainian furniture companies with a long history of export, initially tempered and enriched the Russian market. According to Lesia Asmolkova, the head of the export department of the Volyn company, in the best of times they sent furniture to Russia in full swing and with large lots, without even putting their furniture production on their feet: the future furniture came from Poland, finally formed into a final product in Lutsk. went on sale as Ukrainian furniture.
Does the company regret losing the large Russian market? And so – because deliveries there of Ukrainian furniture and their sale were simple and virtually trouble-free, and no – because, having lost the Russian market, GERBOR instead acquired almost thirty others in different countries of the world. Deliveries to CIS countries decreased but increased to Europe, Asia and America.
Furniture exhibitions – Ukrainian and foreign – traditionally for GERBOR remain the most effective means and platforms for finding new customers, both wholesale and final. And here it is not necessary to “encroach” on the most prestigious, because sometimes local, regional are more effective. Here it is necessary to focus on the prospects of the market. For example, recently such a perspective has opened to Volyn furniture manufacturers in the Spanish market, so it would be a sin to ignore the furniture exhibition there.
Usually, Ukrainian furniture companies do not indulge themselves in exhibitions. Most often they are limited to one per year (usually those who are in trouble with the money), some dare to two – Ukrainian and some foreign. GERBOR’s desire is to present their furniture at as many exhibitions as possible, without embarrassing them, such as Cologne. This is largely why furniture companies are sold not only in furniture-powerful Germany, but in countries such as Albania and Mongolia.
GERBOR practices also the so-called indirect participation in exhibitions: when the furniture is represented not by the manufacturer directly, but by his trading partners in a particular country. By the way, this was the participation of Volyn furniture in the already mentioned Spanish exhibition, as well as in Poland – in Zakopane.
Behind already there are several significant furniture forums, quite productive for GERBOR, ahead of two Ukrainian ones, including the first B2B exhibition of Furniture of Ukraine Business Expo – 2020, co-organized and initiated by the Ukrainian Association of Furniture Manufacturers (Українська Асоціація Меблевиків), as well as exhibitions in Belarus and Kazakhstan. , which is among the most promising markets, so GERBOR does not miss any exhibitions there. Of course, it is impossible for any company to take part in all furniture exhibitions, but the representatives of GERBOR want to visit almost all significant industry shows.
Usually, the company does not skimp on the exhibition area, arrange their exhibits so that the maximum available for visitors to present their novelties. “And even at the Cologne exhibition,” says Lesia, “we had such an exposure that not all our partners have at Ukrainian exhibitions.”
– Do you often have to adjust to the taste preferences (in materials, colors, styles) of markets in different world regions?
– Previously, such differences were clearer, but now they are practically worn: furniture tastes of, say, Mongols and French, are almost indistinguishable. And in Asian or African-Arab countries, they are equally focused on the recognized European fashion fashions – thanks to global internet communication skills.
However, it still happens to adapt the base models to the specific market demands. One of our popular wall models was slowing sales in Spain, because the Spaniards wanted a smaller but smaller size. Of course, the “Spanish version” was also launched.
– Let’s go back to Kazakhstan. Your colleagues repeatedly complain that they are forced to abandon the Kazakh market because Russia blocks rail transit through its territory, and the so-called “Silk Road” is expensive and much longer.
– This is not true now. We are sending our furniture to Russia via rail. Perhaps not everyone knows that Russia’s previous bans have been lifted in the fall. But we, and not only we, because of the prolonged absence of Russian transit, have suffered severely. When they started delivering furniture to Kazakhstan bypassing Russia, delivery times increased significantly and volumes decreased. This was also used by Russian furniture makers, who compensated for the reduction in the number of Ukrainian furniture in the Kazakh and neighboring Asian markets, which were cheaper for Asian countries thanks to shorter and faster logistics. Now we are restoring lost positions there. And unsuccessfully.
– Which markets you have not yet mastered attract the most?
– It seems that the markets of African countries. Furniture of our level, including the price, I think, would be in demand there. The rich countries of the Persian Gulf are no exception.

The section “Success Stories” was founded as part of a grant project with the support of the Swiss Cooperation Bureau in Ukraine, the name of the project: “Increasing the level of cooperation and trust with joint participation in international and national public procurement” – TENDER TOGETHER.