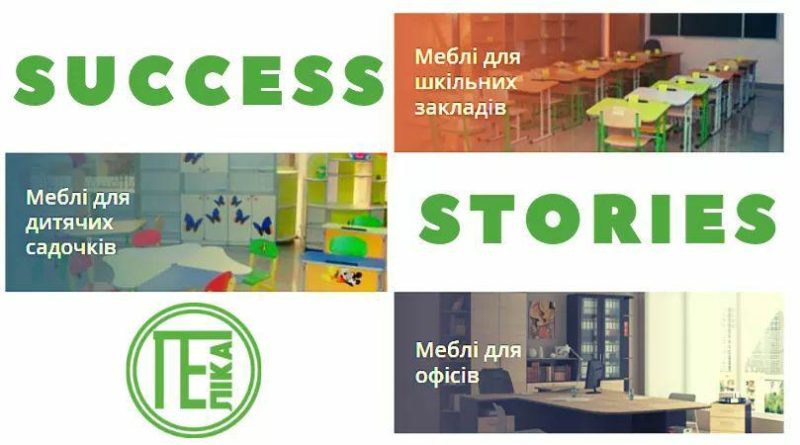 Vinnitsa Private small enterprise “Gelika”, judging by the story of the foreign economic manager Ilona Grabchuk, started very successfully and powerfully in the export business: in Moldova, the company five years ago won a tender for millions of supplies of children’s furniture. The success inspired, the search for markets in other directions began, and they were crowned with success: a partner was found in Lithuania. Thanks to his efforts, he managed to “cover” the entire Baltic. Then the export vector was sent westward and reached Romania, subsequently the Czech Republic and Slovakia. Sales to these countries were no longer as large as the Moldovan character. Although the nature of purchases of Vinnitsa furniture is often the same – tender in the framework of budget educational programs in those countries.
Permanent residence “Gelika”, noted Mrs. Ilona, ​​does not seek to have several partners in the country, to the market she enters, it is enough to have one, but entrepreneurial. He leads out to tenders and finds local retailers.
– Usually your dealers promote only your products on the markets of their countries?
– For us, this is not important. The dealer can work with several suppliers from different countries. You know, it’s even better to focus on such “multi-worker” in search of your representative: it means successful, with experience.
When Polish was also named among the export markets, our curiosity increased here. Poland? And Poland, which is perhaps the most powerful European furniture maker and exporter of furniture? What is she missing?
– In Poland, really very powerful furniture. Enough and cool manufacturers of children’s furniture. But mostly woody. We are interested in their metal, which we produce along with wood – desks, tables, chairs. Their favorable price and good quality have ensured our three-year presence in the Polish market, ”explained Ilona Grabchuk.
And not only this. To Poland allowed Vinnitsa children’s furniture to its market, it was still not enough attractive prices and good quality. Poles were European picky with the parameters of children’s furniture, their other characteristics. I had to provide a large amount of documents in order to get Polish certification of a European standard. But it was worth considerable effort and time, because the certificates received are passes to the market of the entire European Union.
– So you still have to “customize” the products of your basic assortment for certain specific features and norms of specific countries?
– In general, we, the manufacturers of serial furniture, do not have special export models of children’s and school furniture. We offer foreign customers the same as Ukrainian. However, sometimes the basic models do have to make certain adjustments that require national markets. For example, the parameters for adjusting the height of desks and chairs for Lithuania had to be increased to their standards – the seventh growth group, where the children, it turns out, are predominantly higher than ours of the same age and use desks of the sixth growth group.
– Does the fact that the Poles needed metal children’s furniture, about a certain trend – about the generally greater demand for metal products?
– Hardly. Here, the role is played by the traditionally age aspect. Metal furniture – not all-metal, but metal-frame – for older children, schoolchildren (mostly desks and chairs for them), and wood (mainly from chipboard, plywood, sometimes from solid wood) for preschool children, kindergarten (chairs, tables, cribs )
– Some of your colleagues assured that one sensible, proactive, motivated employee is enough to ensure the company’s export activities at the proper level …
– Maybe so, if export geography and volumes are insignificant, deliveries are not intensive, not tender. We have a department in which there are three employees. Deliveries are multidimensional, markets have certain regional characteristics, so each of the managers oversees a certain group of countries.
– Participation in industry exhibitions – for your company, the main means of replenishing the customer base, the search for dealers?
– Not the main one, but still important. The exhibition is a large-scale, but one-time event, and the search for customers is a regular, one might say, daily rather troublesome and troublesome work. Vidzvonuvannya potential customers (“hot”, “warm” and “cold”), correspondence with them, the ability to accurately and fully convey their proposal to them to interest her, face-to-face meetings and contacts – all these are the techniques of daily managerial work.
We are traditionally participants in Ukrainian furniture exhibitions, we participate in international exhibitions periodically – once every two to three years. There are no more specialized exhibitions, for example, children’s furniture or furniture for educational institutions.